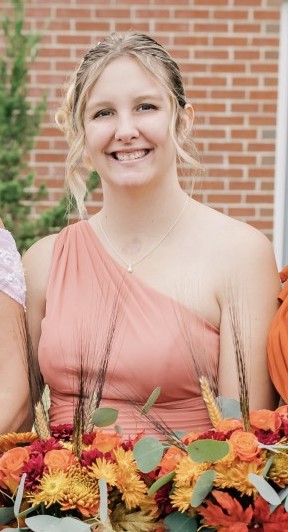 My name is Michaela Grass, and I have not lived the best in the past. I have gotten mixed in with the wrong group of people. There have been some good and some pretty bad moments in my twenty-one years of life.  I have learned it is hard when you find out that the people you thought were friends really aren’t.

One night, I had asked some people I thought were friends for a ride. They had all been drinking all day. Six of us got into a car, and I had been the only one wearing my seatbelt when the car went off the road. I made a very bad choice of getting in the car with them. Looking back at it now, I should have known not to get in the car that night with them.

After the car went off the road, everyone but me were taken to the hospital by ambulance. I was taken by life flight. I could have died that night, and I am very lucky that I did not die.

When I arrived at the hospital, they gave me MRIs then did a bunch of tests. I also had a few seizures. This all happened on a date that I will never be able to forget. The accident was on May 25, 2018. While I was at the hospital my brain swelled, so they had to take off half of my skull to relieve the pressure. I spent 23 days in the ICU then started rehab. I argued a lot. I wasn’t going to do anything that they wanted me to do, like shower or do my exercises. I was arguing on wearing my helmet. They ended up making me do it all, which in the long run, it was good that they did. They had tried to put the original bone back in, but that didn’t last long, I ended up with an infection. The doctor said that making me an artificial bone was the only thing going to save my life. I had a feeding tube, a trach, and a drain in my head to drain the infection. I spent a total of 97 days in the hospital.

After I got out of the hospital, I went home, and I had to wear a helmet whenever I was out of bed. I had then started therapy at MCIR in Brewer. I have been doing rehab for three years now, striving to be able to live a normal life. My therapists have helped me with a list of things that I can help with at home. There have been a lot of very important people helping me out in this journey. Even after this all happened, I went back to school, made honors, and got my diploma.

There have been family members that went out of their way to help my dad and I in this journey. I have learned not to ever look back, just keep moving forward. Living with a TBI isn’t easy, but I am not going to give up!