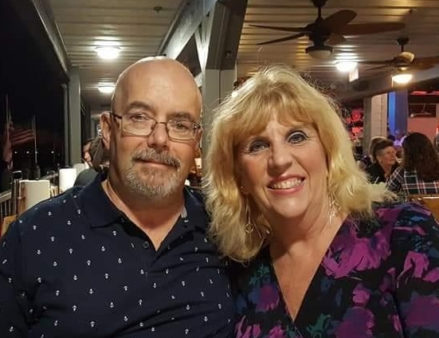 We sometimes look at a brain injury as a singular event. Which it is, but like a stone tossed in a quiet pond, the ripples move outward affecting everyone and everything in our lives. And while our story of survival and recovery is a deeply personal story, the same is true of spouses and caregivers. When we open our eyes and become aware of what has happened and try to comprehend the surroundings, our spouse or caregiver has already had hours, sometimes days or even weeks to grasp the significance of the new normal.

Robin was beginning to feel like a mother hen. Ed had just had rotator cuff surgery on January 17th and he was recovering at home with a sling. Robin was already in the role of caregiver, as she had nursed Ed through a heart attack and multiple stents over the years. She expected this most recent recovery would probably be similar. January and February of 2019 in Maine were cold, icy winter months.  Robin stayed home a week to help Ed recover from his shoulder surgery. She went back to work on January 24th. The driveway was ice-covered and it was raining that day. A flood of water was coming into the house under the doorway. Ed panicked and grabbed a small hatchet and, with his arm still in a sling, went outside and started to chop the ice with his good hand. He fell right over backward, landing on his head on the icy ground. Somehow, he got up and was able to get back in to the house. He was cold and wet all over. He didn’t remember what had happened. Ed was able to call Robin at work and said he couldn’t remember what had happened, but he fell outside on the ice. Immediately, Robin came home. It was obvious that Ed needed a hospital. His head was swelling quickly, stretching his scalp. Ed was becoming a cone head before their eyes. He also had a large hematoma on his right elbow.

The hospital ER doctors reviewed the CT scan with doctors at a larger trauma center. They determined that Ed had a subdural hematoma and a concussion, but didn’t require hospitalization. Ed and Robin were sent home with instructions to wake Ed every few hours and rest. Ed had strong painkillers from the rotator cuff surgery, but he preferred not to take them. He didn’t like the effect they had on him.  So it was Tylenol every few hours and Ed’s other, long-term medications, including the blood thinners he took since he had the heart issues.

One week later, Ed was feeling OK. He was self-conscious of the lump. It was still sore and swollen, and his hat didn’t really disguise it. Ed and one of his grown sons had made a trip to Waterville, where they picked up wood pellets for Ed and Robin’s stove, filling the bed of the pickup. Another of his sons was there to help unload the pellets, but Ed wanted to help. Despite the sling, Ed climbed into the bed and tried to hand the 50-pound bags out to help his sons. Ed soon realized that he wasn’t much help and probably should be watching instead of helping. Ed stepped out onto the tailgate to get down to the ground. He fell heavily from the truck, once again landing on the back of his head. He walked under his own power into the house and without telling Robin what had happened, Ed sat down in his chair to gather his wits. Robin had no idea what had happened until their son came inside and asked “How is Dad?”  As their sons related the details of the fall, Robin bent to look in Ed’s eyes. “Are you OK?” Ed could feel the nausea rising. Robin turned toward the kitchen to get a bowl, or a bucket, or anything, and from the corner of her eye she could see Ed rise to follow her. As she turned toward her husband, he cried, “My legs, my legs!” and fell toward her. She gathered Ed into her arms as his sons put a chair under him and held him on the seat. The next few minutes were a blur, a familiar blur. Call the ambulance, send a son to the top of the driveway to direct them, get ready to go, put the dog in a bedroom, and chase the ambulance to the hospital.

Ed was in a coma before the ambulance arrived at the hospital. The weather was cold and windy, and the Life Flight helicopters were not flying. Ed would not survive an ambulance ride to the next hospital. Robin preferred Bangor, as she had family in Bangor. The doctor said Bangor would be as good as Portland. They found a helicopter and a pilot willing to fly in Lewiston. Robin needed a bag and some clothes, then she would drive to Bangor.

The blur continued, and Robin was in the car when the phone call came through, Ed was in Bangor already! It had only taken them 15 minutes to get Ed there. It was a neurosurgeon calling. He said the swelling was creating pressure, and that Ed could not survive this injury. He said that Ed most likely would not survive the surgery either. Wait, what? Ed must have surgery to remove a piece of skull to release pressure, but Ed cannot survive a craniotomy, because of blood thinners. We can reverse some blood thinners, but not Plavix. The doctor kept saying this over and over. What was a high-speed blur now became a slow-motion train wreck. The blood thinners that helped save her husband may now cause his death. The surgeon was willing to perform the surgery, but he said Ed would probably not survive. But he did. Against the odds. The tough old bird remained in a coma for 2 more weeks before he opened his eyes and days later, finally moved his thumb.

Today, Ed is still aware of the missing chunk of time, the time that he lost. But not Robin, she remembers every long hour. The endless days of sitting at Ed’s bedside and watching him grasp at the tubes, trying to pull them out. Then another awful night, Ed “coded” on February 21st due to a plug of mucus in the breathing tube. It took the trauma team 4 ½ minutes to revive him.  The longest 4 ½ minutes his wife ever went through.

Robin’s fear was that he would choke and die. She feared going to sleep and have him code again. Many times, she had to get the respiratory team in to suction him out. She was afraid they wouldn’t know he was choking until it was too late. She never left the hospital, and spent every day and night next to him. She spent 44 nights sleeping in a chair beside him, before he went to a brain injury rehabilitation center. With the hours of worry over work, of house payments and expenses, and not knowing, Robin made the tough decision to return to work. It would then become over an hour commute to visit with Ed.

Survivors may experience Post Traumatic Stress Disorder (PTSD), “what if I fall, what if it happens again”. But the spouse who spent those hours or days alone, worrying, the spouse who prepared to maybe say goodbye, the spouse who struggled with the bills in the absence of income also can feel the PTSD. And often the recovery of the survivor over shadows the wellness of the spouse. Leaving little time for the spouse to heal from that terrifying singular event. A singular event, shared by two, but from two different points of view.

One year later, you wouldn’t know from physical appearance that Ed and Robin had a miraculous story to share. Unless you looked closely at Ed’s hand or his scarred skull, you might not know. The same is true of Robin. Unless you looked closely into her eyes, you might not know. They are making plans to split their time between Maine and a southern state soon.  With their shared passion for sailing, they have decided to keep their 36.5’ Pearson Ketch which they’ve named Odyssey.  The meaning of this name is “A long exciting journey”.  This will become the summer home for these two mariners, and the beginning of a new chapter.