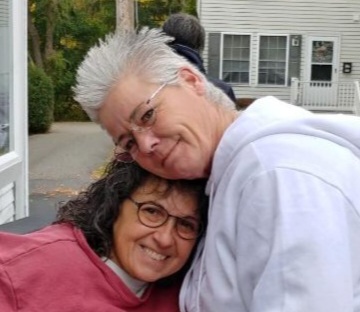 Marion Sellner and Marianna Russo have been through a lot in their nearly 18 years together. They both grew up in Portland, where they still live, and the couple got married in October of 2016. They both experienced trauma in their lives, and they have spent a lot of time in recovery—from addiction, eating disorders, and now, brain and spinal cord injuries.

In 2014, Marianna needed a knee replacement. She went into the hospital for the routine surgery, but a complication from the anesthesia resulted in a large blood clot forming on her spine. The clot was removed, but Marianna was left paralyzed. Marianna, however, was determined to walk again. Eight years on, though she still utilizes a wheelchair, she can now walk short distances with assistive devices, drive, and recently started working a part-time job. “This injury was one of the greatest gifts I ever could have gotten,” said Marianna, “I have a whole new gratitude for life.”

Then, in 2021, Marion needed cervical spine surgery. After the initial surgery, Marion needed a second operation, so she had back-to-back surgeries accompanied by high-dose steroids. In the following days after being discharged, Marion experienced a number of issues. Her blood pressure was elevated, she was not feeling well, and she was not eating well. Then she started experiencing vomiting, dizzy spells, and cognitive issues, and a rash developed on her back.

Back at the hospital, she fell. Then a CT scan revealed the unimaginable: the shingles virus had traveled through Marion’s bloodstream into her brain. Marion was immediately started on antiviral medication, but the virus was already causing damage to her brain, and a couple of days later she had a series of strokes.

Doctors spoke with Marianna about end-of-life decisions and palliative care for Marion. Everything they were looking at indicated that, if Marion survived, she would be blind, paralyzed, and require 24-7 nursing care. Marianna talked to Marion all day, and she asked everyone they knew to pray and send positive thoughts. She told Marion, “If you have the fight in you to do this, come back to us.” Not long after, Marion woke up, and she has been making strides ever since. After a long stretch in the ICU, neuro unit, and then acute rehab, Marion returned home. She still faces challenges, but she is working hard to make gains.

“Just hang on and don’t give up,” Marianna said. “We’re both fighters and warriors, and miracles happen every day.” Through all of their challenges, Marion and Marianna have managed to stay positive and look for the silver linings in life. “We have our difficulties,” Marianna said, “but we don’t stay there. We let the feeling in, and then we let it go. One step at a time.”

Marion and Marianna encourage people 50 and over to get their shingles vaccination to prevent the disease and its complications.