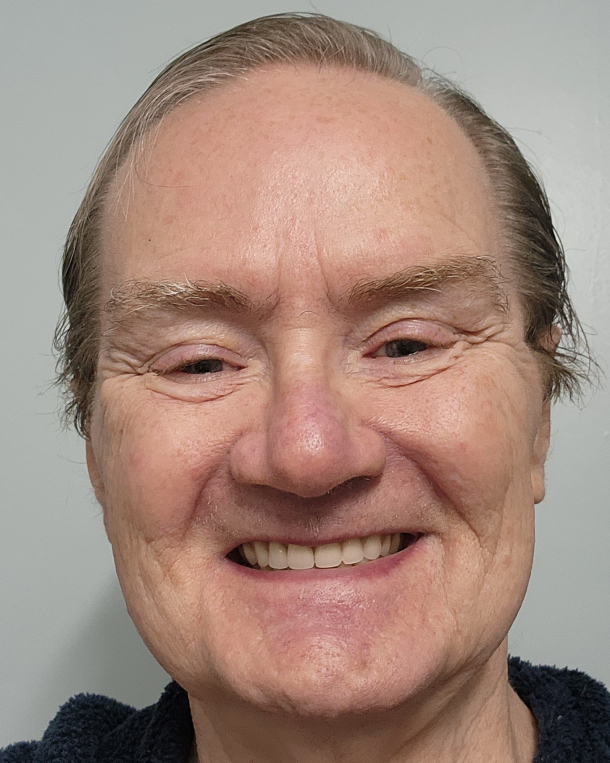 Jim Beaudry grew up in Thomaston, Maine. He was a Navy hospital corpsman working wards and treating patients during the Vietnam War, and he worked with patients in intensive care, recovery, and infectious disease wards, as well as in pediatric clinics. His many years with the Navy took him to remote parts of Alaska, to Rhode Island, and to other parts of the country. In Alaska, he worked as a senior corpsman treating patients across the scope of the hospital from emergency to pediatric services and he was also the only person on the island with any veterinary experience.

During his service, Jim went back to school through the Naval optician school and a local community college and became an optician. He worked in Virginia and then became licensed in South Carolina where purchased and ran a Pearl Vision center, and then stayed on in the south working for different companies. When receiving care from the VA, he received a diagnosis of bipolar disorder and eventually developed parkinsonism, which left him totally disabled and unable to continue his work as an optician due to tremors and other symptoms. In 2014, Jim had a stroke on the right side of his brain, and he recovered fully.

When he came back to Maine in 2018, he saw a doctor at the VA who said he didn’t have the symptoms of bipolar. Jim was weaned off the medication he had been taking for 20 years, and his parkinsonism symptoms, which had been caused by one of his medications, disappeared. In September of 2019, Jim was walking in Rockland when he was struck by a pickup truck in an unmarked crosswalk. He remembered the surprised look on the driver’s face when the truck moved, and then he regained consciousness when someone lifted his head and put a sweatshirt beneath it as a cushion before he was loaded into the ambulance.

When he woke up, he felt well and was making jokes and giving thumbs up, and when he arrived at the hospital, Jim told the doctor that he wasn’t knocked unconscious during the accident. He was, but he wouldn’t realize it until about two weeks later. His CT scan came back fine, so they bandaged his head and sent him on his way. When he visited the VA, they did not offer any additional care or treatment.

A couple days later, Jim felt terrible and went to the emergency room. He was given a cervical collar for his neck pain, but he was back in the emergency room within a few days. All of his CT scans showed nothing, and a neurologist told him he’d get over it if he drank a lot of water.

In the weeks after the accident, Jim began to struggle with basic tasks. He often volunteered at the Thomaston Historical Society, and when he returned to work on a project, he found that he couldn’t count or remember what numbers to put on the photographs he was working with. About seven months after the accident, Jim’s memory was so bad that he left a tea kettle on the stove and went to bed, and his apartment caught fire.

Finding treatment has been a huge struggle, and Jim still deals with pain, spasticity, peripheral neuropathy, and sensory flooding on a daily basis. He also now has sensory processing disorder and his right side is numb. Jim recently went to a LoveYourBrain yoga retreat in Jefferson, Maine, and he had an amazing experience and it was a life-changing event. He met so many wonderful people and is still in touch with many of them.

Through his brain injury journey, Jim has experienced greater empathy and compassion for all people, and he is much more focused on mindfulness, understanding, patience, and his love for nature. In a lot of ways, he is thankful for his brain injury, the lessons he has learned along the way, and how it has made him a better person. In addition, Jim has found direction and his mission: he wants to spend the rest of his life raising awareness around brain injuries.