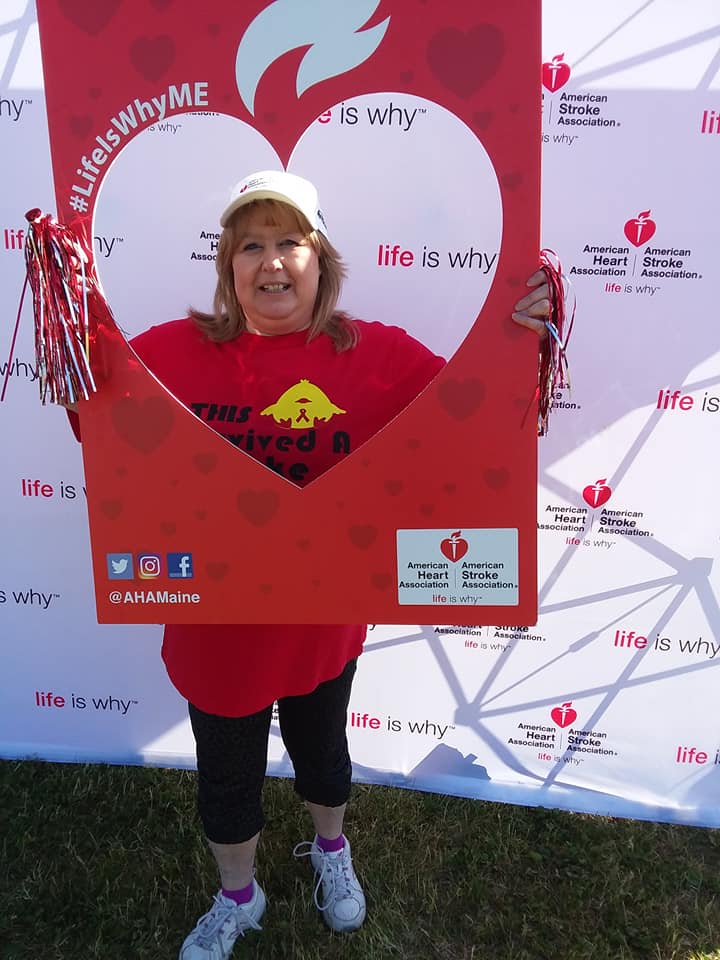 Tamara Osgood is an Environmental Services Tech at a local hospital and didn’t realize at the time that she was experiencing TIAs (transient ischemic attacks) leading up to her mild right ischemic stroke which affected the frontal, temporal and parietal lobes of her brain and resulted in deficits of her left arm and hand. Despite seeing stroke signs (F.A.S.T) throughout the halls and other reading material, it never occurred to her.
Stroke is the droopy face, right? Well, she never experienced that. Instead, for her it was tingling in her face that would come and go randomly. A month prior to her stroke she was confused and disoriented. On a couple occasions she knocked over a drink instead of picking it up as she slapped it across the room. Meanwhile, Tamara had been eating healthier and working out for the past year or so, and had managed to lose roughly 40 pounds when she hit a plateau. It was then she decided to add weight training to her workout routine.
The day after turning 45 and also doing the strength training, she woke with a heavy arm. She laughed it off as wow, so this what 45 feels like? Aging quickly. Hahaha. The next few days her arm was still heavy, and now she was thinking perhaps she over did it. Two weeks had past and there was still no improvement, so she called her primary care office for an appointment. It was there she was told she had carpal tunnel, and physical therapy sessions were set up. Two weeks into therapy there was still no improvement and she was feeling worse.
During this time, she was driving to and from work, working overtime and working out on the treadmill. Upon waking the morning May 17th, her hand would not straighten and was like a claw and extremely cold. Getting ready for work she struggled putting makeup on and getting dressed, and she needed help tying her sneakers. She drove herself to work. Once clocked in and on the floor to start the work day, she struggled donning her small gloves. Determined to work, she proceeded to try mediums and larges. No luck. She couldn’t get fingers in the holes of the gloves.

After several minutes trying, she came to the conclusion she couldn’t work that day and started crying because she would lose her perfect attendance at work. She was also crying because she was scared and frustrated that her hand had gotten worse. Upon clocking out and leaving, her supervisor suggested she checked out, but Tamara said she already had physical therapy scheduled for the next day. She then proceeded to drive herself home.
The next day at physical therapy she showed her hand to the therapist. The physical therapist said to hold off on PT today, however, she wanted an occupational therapist to see Tamara. The OT gave her a strength test on both hands and, sure enough, her left hand was very weak with significantly decreased numbers. They both told her to go see her primary care physician. Her PCP was out of the office until Monday, so Tamara went home.
Tamara called out of work for the weekend, again messing up her perfect attendance. Over the weekend she wrapped her hand up to keep it warm and elevated, and kicked back in recliner. Monday morning, May 22nd, 2017, her husband Robert drove her to a scheduled physical therapy appointment. Upon arriving the physical therapist was shocked to see her and was concerned. She said “you really need to go next door to walk in care to get checked out.” Tamara and her husband said we they would go to the hospital instead as they were more equipped and knowledgeable.

The OT gave them copy of her hand grip strengths and her physical therapy report with a note to give them at emergency department. Tamara and her husband left and, on the way, they decided they better grab something to eat as emergency rooms can go on for hours. They got coffee and food at McDonald’s followed by a smoke, then off to hospital they went. They got there at 9 am and after several tests, bloodwork and her husband Robert explaining that it was like her brain wasn’t communicating to her hand, an MRI was ordered.
Tamara recalls that while she was in the MRI machine to figure out what was going on with her arm and hand they had stopped the test and then added a thing that looked like a football helmet and slid her back into the machine. At that point while lying in the machine, she was thinking “Oh, my God, they think something is wrong with my brain? Oh, my God!” but she was still not thinking stroke.

After the MRI, Tamara was diagnosed as having had a stroke, and possibly more than one. She had a mild right ischemic stroke that affected her left hand and temporal, parietal and frontal lobes. Her cognitive abilities and memory as well as use of her left arm/hand can still be a struggle, but she is stubborn and a go getter, and she still works at the hospital as an Environmental Services Tech. You gotta get the mind and body active, period. It wasn’t easy in the beginning with post-stroke fatigue and depression, but it does get easier with time, dedication and determination.

Tamara wants everyone to know the signs of stroke: B.E.F.A.S.T.