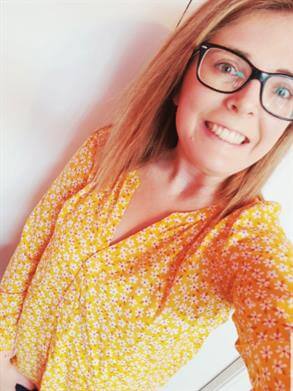 February 3, 2016. I was 20 years old. It was just another normal day off for me. I got up and got ready to go hang out with friends for a while, then I was going to go and babysit for another friend who was getting her wisdom tooth out after work. It started to rain, and that made the roads slushy, but I didn’t think anything of it, because I thought nothing bad would ever happen to me. I remember getting in my car to go to babysit, and then it goes blank. I just go by what I was told. I didn’t make it far down the road on Route 2 in Carmel, and I hit a patch of black ice, did a 360 in the road and hit a tree on my passenger side door.

I wasn’t wearing a seat belt. Luckily for me, the friends I had just left had an appointment, and left right after me. They were the first people to get to me. I was unconscious by that time. They called 911, and the dispatchers told them to get in the car, and to keep me from moving. I had broken right side ribs, a broken right clavicle and a big egg on my head. When they got me all cleaned up and hooked to the vent, they moved me to the ICU, which was where I’d call home for the two and a half weeks.

I had a CT scan, and it showed that I had an diffuse axonal head injury. Meaning it’s my whole head that was affected. It had been about a week after the accident, and I still hadn’t woken up. So, they took me off the vent and replaced it with a trach. They took the feeding tube from my mouth, but replaced it with a G tube in my stomach. My brother, who was seven years old at the time, finally got to come in and see me. He would talk to me, and my heart rate would go up. I knew he was there.

Another week went by, and I still wasn’t awake, so the doctors came in and told my parents that they didn’t know if I was going to wake up, and if I did, they didn’t know what I’d be able to do. They had moved me to the 6th floor, which is the respiratory floor. One night in the middle of the night, I managed to get the mitts off my hands, and I pulled my trach out. So, back to the OR I went, and then back to the ICU. A few days later, the nurse was in doing her thing and my parents were out of the room in the hallway, and she said, “Oh my goodness, her eyes are open!” Then I was transferred to the acute rehab floor.

As I was being wheeled out back to my room from a therapy, I came back to being Logan. It was like an out of body experience. But, I was confused why I was in the hospital, and why I couldn’t really talk, or walk. My mom told me I was in an accident. The first thing I asked was if I had anyone with me, because I always have cared about people more than myself. I had gotten to a place where I was ready to be discharged. April 19, 2016, I was going HOME.

I started out with home therapy for a little bit and then I started at MCIR in Brewer. I was in a wheelchair at that point. I was getting stronger, and I was determined to get the walking thing down, which I did finally, and was able to ditch the wheelchair! I continued to get stronger and stronger, so I was able to return back to work where I was employed before the accident for just two hours at a time, folding silverware. Then by the summer of 2017, I finished my first 5k. Summer of 2018 I was discharged from PT at rehab. I started coaching field hockey at Bangor high school. (I didn’t go to Bangor; I went to Hampden academy. They’re rivals.)

I still have problems with my with my speech and my eyes, but I go to Boston Medical center for treatment for them. I still go to therapy at MCIR, but only two days a week. I work two days a week, and I bus tables for one of them.

January 22, 2020. I am 24 years old. If I could go back to being 20, I would tell myself that nobody is invincible and things can happen in an instant. And also, to wear your seat belt ALWAYS.