Sexuality is a Family Matter

Categories: Being a Caregiver, Living with Brain Injury

Changes in sexual behavior are a common consequence of brain injury and present many problems for professional staff in facilities, families, and friends. Brain injury, in general, can disrupt the way a person thinks and acts and when the changes affect sexuality, it can be very uncomfortable for all in the immediate environment.

We are all sexual beings but when sexual behaviors are displayed at inappropriate times and/or places, there is a certain stigma attached to the person and the behavior. It is important to remember that inappropriate sexual behavior is just a “behavior” and should be viewed as such and managed as any other unwanted behavior. If put in a separate, possibly more unpleasant category, the result is often that you may inadvertently reinforce undesirable behaviors.

Later, in the rehabilitation setting, therapists often deal with unwarranted flirtatious advances, such as attempts to hug and kiss, and this behavior often gets in the way of progress. The therapy team as well as family and friends need to be instructed in ways to redirect the unwanted advances and not allow the patient to use them for attention getting purposes.

Many times I’ve visited rehabilitation facilities in which I have witnessed young men trying to kiss a therapist during a therapy session. I am appalled to hear the therapist respond, “Oh Bill, you’re such a flirt!” This only reinforces the unwanted behavior while Bill should be told that he was in the gym to work on his mobility skills and his unwanted advances makes the therapist uncomfortable. Frequent reminders about the staff/patient relationship may help the individual have better control over very basic impulses when placed in close proximity to a person of the opposite sex. Staff also needs to be more aware of working with a person with diminished perceptual skills and how they act around the patient is important to maintaining the working relationship. For example, the physical therapist often works closely to the patient for support and even on occasion straddles the patient to achieve proper positioning. It is quite natural for a young man, hospitalized for many months, to misinterpret that situation and the therapist may need to explain the maneuver therapeutically before attempting it. Family and friends visiting the rehabilitation center should also be warned about the effects of dressing provocatively around patients when inappropriate behavior is a problem.

Personality traits that were condoned before the injury may be intensified by injury and it may be difficult for the patient to understand when the rules change. For example, knowing when and where to tell an off-color joke may be a problem for a person with poor judgment. It is hard for the family to understand that brain damage usually affects control mechanisms that monitor the sophistication level of one’s social skills. Families traditionally are less tolerant of this type of behavior than they were pre-injury because they are more aware of the consequences of such behavior. At the same time the individual with brain injury is less aware of subtle nuances and has little ability to benefit from feedback and will make the same mistakes over and over again.

Changes in adult sexuality may result in hypersexuality or hyposexuality. Hypersexuality is less common than hyposexuality, but David Collins, MEd, a disabilities educator with both brain and spinal cord injuries, describes hypersexuality as a macho thing related to feelings of inadequacy and loss of self-esteem. In the later stages of rehabilitation the need to demonstrate the capacity to perform sexually becomes a way of feeling in control and reinforces one’s manliness. In contrast, hyposexuality is a diminished interest in sex, a general malaise and emotional lability that seldom supports emotional highs or lows.

Youngsters, on the other hand, have somewhat different problems relative to sexuality. For many youngsters, there is a lack of awareness of their bodies and youth is a time for exploration and experimentation. Youngsters need extra guidance through this period to feel secure about exploring their changing bodies and feelings with the support of caring parents or counselors. When inappropriate sexual behavior is a problem other members of the family need to be safe from unwanted advances. This may require placing locks on doors to ensure siblings privacy. There is a rare condition called, precocious puberty, that results from hormonal changes after injury to the brain. Children experiencing Precocious puberty experience rapid progression of secondary sexual development. It is very important for treating professionals and families to be aware should this condition develop.

As is the case with any problems related to cognition and behavior it is important that your family member have control over those aspects of his/her life for which there is a reasonable expectation for responsible behavior. When behavior is not responsible or inappropriate, particularly sexually inappropriate, steps need to be taken to learn better ways for managing or compensating for the lapses in social skills.

A prerequisite for any discussion about sexuality requires that the family be comfortable with the subject. Some suggested ways for achieving appropriate sexual attitudes in home settings are:

In conclusion, it is vitally important for families to understand that neurologic injury may result in undesirable changes that require their intervention to manage effectively. Sexuality is an area that is often difficult for families to discuss within and outside the family circle; however, the family needs to be open and communicate unemotionally about inappropriate behaviors of any kind and problems related to inappropriate sexual behavior in particular. Helping your family member monitor sexually inappropriate behavior will save you endless problems with embarrassing and often unsafe situations.

This article originally appeared in Family News and Views, a monthly Publication of the Brain Injury Association of America in 1992. 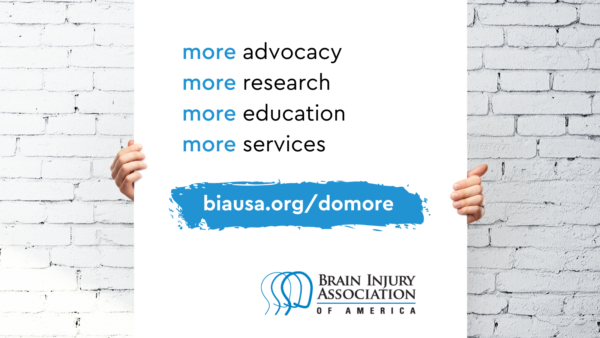 Brain Injury Awareness Month is almost here! Spread the word in your community or step up by raising funds for brain injury services, supports, and research.

Join us during the month of March and do more for brain injury. Click here to find out how.