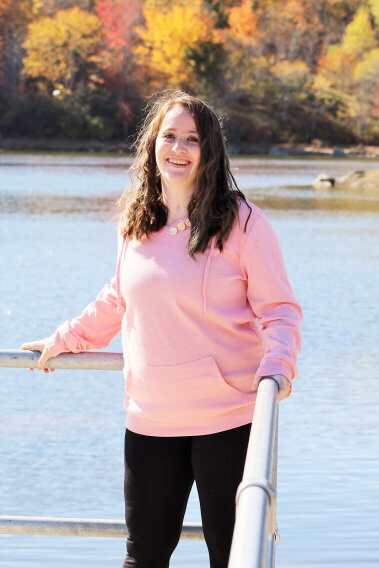 My name is Jaime. I am 30-year-old whose life has been changed forever. On November 20, 2017, I suffered a massive stroke that usually only 2% of people survive, caused by a blood clot in the brain and I still have no answers on what caused it. My body was going numb, I could barely walk, I couldn’t swallow even my own spit, my face was drooping, and felt really weird. Something was really wrong with me, I could feel it, but I wasn’t sure what.

I wasn’t too scared because I never really thought being 29 I would ever have to worry that something this serious would be happening to me. A few days later I started waking up, and all I could hear was all kinds of beeping. When I opened my eyes there were tubes and wires everywhere and I couldn’t move at all and I was trying to talk and nothing would come out. I was terrified, and I was all there but that few days of my life was a blur.

As a few more days went by, I heard doctors and my parents talking about how I had a stroke and I had what you called locked in syndrome, a medical condition usually resulting from a stroke that damages part of the brainstem, in which the body and most of the facial muscles are paralyzed but consciousness remains and the ability to perform certain eye movements is preserved. I had to have a trach put in and a feeding tube and had them for months. Didn’t I miss food so much!

I went through a couple months of physical therapy, occupational therapy, and speech therapy, trying to get back as much movement as possible. I was unable to talk and I had to learn a whole new way to communicate. A book was put together for me with all the letters of the alphabet, and let me tell you that was hard and frustrating for everyone because I had to spell with my eyes. I never realized how many muscles a person really had till I had to learn to use every one of them all over again.

After a couple months I decided that I was just ready to go home and still really had barely any movement, but my thoughts were I would recover where I felt comfortable. For a while I had to be driven around by ambulance, I had no strength, and I found out how crazy my life was going to get with all the doctors and therapists that would be coming to the house. They were helping me to get my life back, well my new normal anyway, and day by day I would fight and with determination I was making so much progress.

I am a mom of three boys and that is what has kept me going. I had to pretty much have everything done for me and if I didn’t have so much support and help I don’t know what I would have done. I was getting stronger and learning to do things again and I got to a point where I could do outpatient therapy outside my home, and from there I was just gaining and gaining. I was able to eat again, drink again.

As of today, a little over a year later, I continue to fight and continue to gain everyday. I went from being able to really do nothing to being able to shower all by myself, do my hair, and get dressed. I have all my fine motor skills, I get to stay home alone, cook my own food, and I can walk very slowly with nothing around the house, but it’s still a work in progress. My bedroom is upstairs so I have mastered the stairs as well. I have gone bowling with my kids, play basketball as best as I can, and try to do all the activities with them as they are so attentive to me. I go to the YMCA and do my own extra work and I have driven a few times. When its cold I turn into the tin man but every day proves to get easier. I fall and I get back up. I have learned to talk little by little and my voice gets stronger every day. It’s still a struggle. Most of the time I can be understood and I am working on it every day. This has definitely not been easy. I have my breakdowns and my days where I really just am so mad and don’t understand why me, but I put that anger into working harder. I am not 100% and I may never be, but I have learned to accept what my new normal will be, and just keep going and give it my all. One step at a time.