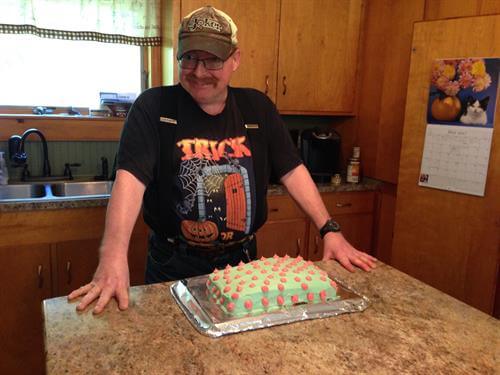 It is me today, yesterday I was you, tomorrow you could be me. A Traumatic Brain Injury (TBI) can happen that quickly.

Hello, I am David L. Lamont and I played cribbage in a statewide tournament during the month of March 2018 with 50 locations statewide. Proceeds benefited Memory Works support/advocacy for seniors with dementia. I also played last year in 2017, and placed well but did not win. I plan to be playing in the September 2018 Cribbage Tournament also.

On September 4, 1993, shortly after my 29th birthday, I was riding in the back seat of a Bronco with two acquaintances of mine in the early morning. The driver fell asleep and veered to the right of the road into the ditch, hitting a culvert head-on at 25 mph causing the Bronco to somersault and I was ejected through the back window. I landed 105 feet from the point of impact across the road in the ditch on the back of my head and right shoulder. The state trooper on scene was a friend/classmate of mine who actually helped save my life. I was taken to the local hospital and immediately transferred to EMMC in Bangor by ambulance as we were fogged in and could not catch the Angel flight. They lost me twice on the way and had to bring me back.

During my stay (5 months) I was in the ICU, step down, and a private room 100% monitored. I had a feeding tube, a tracheotomy, and spent a good part of my time in a Craig Bed (4 eight foot walls 4 feet high with two twin bed mattress on the floor). At one point my digestive system started to digest my feeding tube, causing complications. I was in a full coma for several days and a partial coma for several months. I lost all of the knowledge I had gained in the first 29 years of my life. My parents visited every weekend while I was in Bangor and other family members and friends visited often.

I was then transferred to a Head Trauma Rehab Unit where I would start to rebuild my life. I had to learn to walk, talk, eat, swallow as I had trouble drinking, and be potty trained to name a few. I was in a private room and would reside there for 1 ½ years, celebrating my thirtieth and thirty-first birthdays. Spending day after day in a wheelchair was not a lot of fun. The life saver was that my parents visited me twice a month and other family members and friends came often.

In mid-1995, I was transferred to a group home in Portland and enrolled in a day program walking with a walker where I would stay for another 1 ½ years. I learned to walk with my walker on snowshoes, which was not easy but got the job done, and I dropped the walker finally. I fine-tuned all the things I had learned at the Head Trauma Unit. I also learned to play cribbage again, which took me several months but I got it done.

After 3 ½ years in 24/7 care, it was a very happy day for me when I left the group home and moved into my apartment. I got it furnished good to go. I continue in rehab daily, as I need supports to survive; I work part-time, have volunteered at 24/7 residential units, and have received several awards for things I have accomplished. I am a collector of several items and play cribbage in the super advanced level internationally online. Supposedly I am very lucky to be alive due to the extent and severity of my injuries. Some say it’s a miracle.

My mom passed away in February of 2015 after a long and courageousbattle with cancer, which was a great loss to my family and me. Shortly after my Cribbage Tournament in 2017, I found that I had cancer also. Not a fun trip and I had to do 25 sessions of radiation over a period of five weeks. Now I am cancer-free, hopefully forever.

I am very independent, do not like authority, and want to live my life my way. My goals for the future are to work more, learn new things of interest and be happy. Prior to my accident I worked several jobs, driving trailer tanker truck, as a chef, as an assembly line worker, in a radio station, traveled with a carnie for two seasons, and was a male model when I was in grammar school.

The journey I have been on is not easy. It is a challenge every hour of each day and something I would not wish on anyone. Thank you so much for reading my story and I wish each of you wellness and happiness.