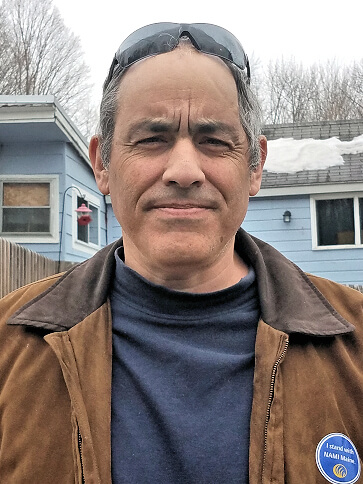 I was sitting in a highchair when my grandmother got a telephone call; it was my mother and she had just told her my grandfather passed away. Gram was on the telephone and heard a big bang. She immediately looked to see if I was okay. Seeing me on the floor, she panicked, and a few minutes later I had a seizure. I went to many hospitals and they did not know what it was or what I had. My parents went to many hospitals before finding the right one where they got a diagnosis of epilepsy.

At Massachusetts General Hospital (MGH) the doctors all crowded around me and kept poking me with many tools and giving me all these pills to make me better. What the doctors did not know was that I also had ADHD and dyslexia, so the pills they gave me made me tired. One doctor I saw in Portland gave me hope and said off the record, “I bet you could have surgery.” I never forgot that. I tried every doctor in Maine and they all said surgery was not in my best interest to have done, not now anyway, until I went to MGH.

The day I went to MGH, I walked into a room of about four doctors and four nurses, and I said, “Boy, you guys are serious about this,” and they were. They had me sit down and tell them my full story and how I got to this point and then I waited for the end of the day when I would hear if I qualified for the surgery. Then they said they would call me to let me know. I went back to Maine and every time that phone rang I thought it was them, but it was not.

Many years down the road in 2015, I was still having seizures and living by myself, and I got home around 5:00 and found a message on my machine saying that a Dr. Stein wanted to meet with me. I got off the phone, called my mom and said, “You are not going to believe this!” and I played the message back to her. We headed down to Boston for more testing. They had me doing so many tests I didn’t even know what day it was and I was tired. The next day I went and then signed the papers, but I still had to wait. Very frustrated, I headed back to Maine. There I had a big grand mal seizure, mom called an ambulance, and I was rushed to the local hospital. When I was at the local hospital they could not do anything so they were ready to discharge me, and one of the nurses said, “hold on!” The local hospital called a helicopter to take me down to MGH! At MGH I had the surgery: a left frontal parietal craniotomy with resection.

When I awoke half my hair was gone and I called the nurse and said, “shave it all please.” I am really blessed to have the life I have now and boy I tell you I never thought I would be telling my story. The day I left MGH the nurse came in and put a paper down in front of me. I asked what it was and she said “I hope you sign this; it will give all Harvard students the ability to review all your operations to further their careers,” so I said sure. I had a fine three weeks down there and sometimes it was hard but it was worth it. Before I close I just want say don’t ever give up. Yes, I know it is hard and looks like the road will never end, but I never thought I would be here and I am!