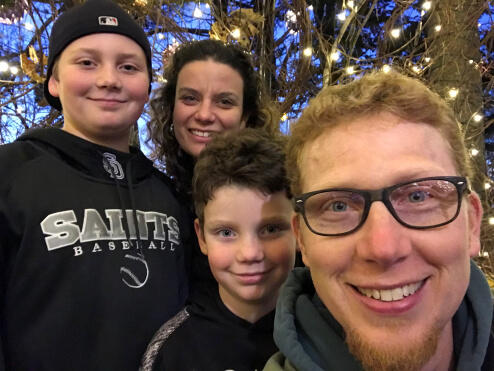 I was 19 when I first uttered the words, “I have cancer.”I was fresh out of high school and just back from a 4-month missionary trip to Zimbabwe, Africa working to save money before starting at Gordon College in the fall of 1997.

My eyesight started failing to the point that I couldn’t recognize my closest friends when they came into the store I worked at, I couldn’t read the prices on the computer screen, and I was experiencing excruciating headaches. After a trip to the eye doctor, my first MRI, and a visit to a neurologist, my family and I were told that there was a mass growing at the base of my optic nerves called a craniopharyngioma. The doctor recommended immediate surgery to remove it.

Naturally this frightened us terribly, most notably because my grandfather died of brain cancer, but being so young and naïve I never considered long-term effects. I recall thinking “let’s get through this surgery and move on with life.” I had no idea that this was only the beginning.

Reality struck with news about a pair of medications I would now be on for the rest of my life and that I would need to go through a total of 30 radiation treatments at Brigham and Women’s Hospital in Boston. This was when my breaking point occurred. I was young, scared, tired, and unskilled at city life. Staying in the Ronald McDonald house for my first week of treatment and learning the subway system both challenged me greatly.Daily I focused on counting down the treatments and looking forward to starting college.Unfortunately, college didn’t begin exactly as I thought it would, for I arrived just days after my last treatment as skinny and pale as could be with a full load of emotional baggage. While barely graduating on schedule, I wrestled with why this happened, I struggled with my grades, changed my major four times, and at one point my parents “encouraged” me to drop out. Thankfully, I also met a beautiful girl with a car that I would go on to marry in 2001.

Six years to the day of my first surgery at my yearly MRI check-up, after being married less than 2 years, we talked about what we would do to celebrate 6 years of good health, that is, until the doctor came in to the room and told us the tumor was back. My second surgery took place two weeks later at Boston’s Children’s Hospital where the doctor decided that rather than go up my nose like last time, that he would cut open half my skull.

After recovering we decided to move back to Maine to be near our families and possibly start one of our own. However, as a result of my previous surgeries and radiation I was told I may not be able to have children. To test this, I had a count done which came back at 0, as in 0 chance.Being told you can’t have kids is hard enough, being told someone you love can’t have kids because of you is so much harder.It left me feeling useless, broken, and that I was devastating my wife’s dreams of being a mother. As a couple, we decided that because we never heard the doctor say “it is impossible” for us to have children, that we would cling to whatever hope we could find and keep moving forward.

We first found hope at my endocrinologist’s who started me on daily injections in December 2003 to increase my testosterone. Each one was delivered by my wife into my thigh. In October 2004, after months of heartache and strain on our marriage, God answered our prayers when I woke to her crying and saying she was pregnant. It took us a total of 170 shots, but we were going to have a baby boy!!

Our joy was soon quenched as less than a year later my eyesight issues resurfaced.I requested an MRI, which revealed the tumor was back for a third time. This surgery took place two weeks later in March 2006, with my 8-month-old son near my side. The doctor at Boston Children’s Hospital opened up my whole forehead this time, using pliers while inside to get every piece of tumor and scar tissue he could. Despite the team’s best efforts, 30 treatments of radiation at Mass General Hospital were again recommended, but there was also a 15% chance that I could go blind at any point over the next two years if I did it. If I didn’t do it there was no promise as to what might happen. Seeing that I’d already lost my ability to smell, to taste, to make babies, and that I was on a number of meds for life we decided to take the risk and have the radiation.

During that two-year window, there were lots of nervous mornings and scares from headaches and sleepy seeds in my eyes.I was terrified at the thought of not seeing my family again. Through it all, we put our trust in God and believed he would protect us either way.

As crazy as it sounds now, I had SO much faith and trust in God that just over a year after the radiation, WHILE I COULD STILL GO BLIND, I asked my wife if she wanted to try to have another child. Little did I know it would take 18 months of torture that included a failed IUI, a false positive on my wife’s birthday, testosterone levels that rivaled the Incredible Hulk, and 372 injections. In the end, it was all worth it as another baby boy was born to us in 2010, our second miracle.

It has now been over 12 years since I finished my last treatment of radiation!!Since that time, I have gone on to accomplish and do many other things such as finish graduate school as a straight-A student, become a Board-Certified Behavior Analyst, a coach for my son’s sports teams, and serve as a pastor where I can now pass on the hope we have to those around me.