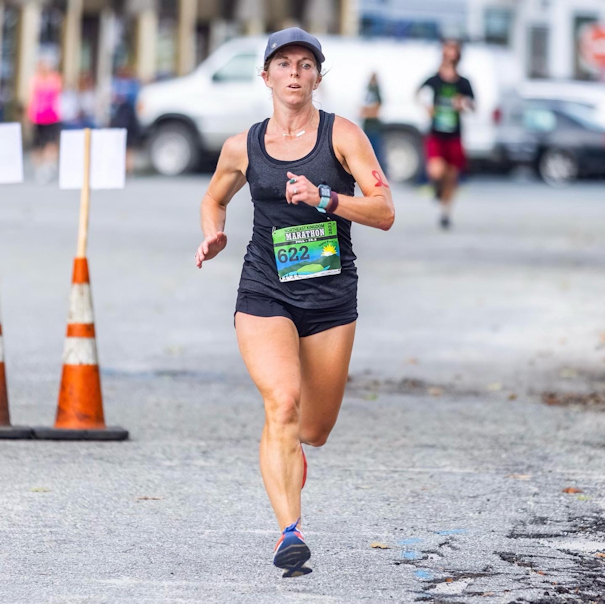 I have lived in Kennebunk, Maine since 2005 with my husband and family that now consists of two daughters ages 18 and 13, one son aged four, two dogs, a cat and even a horse. We moved here from northern Vermont to live on the seacoast. I am a mother/wife, classroom teacher, yoga teacher and endurance athlete. My entire family lives a life of outdoor recreation and adventure, we each have our individual as well as shared passions of surfing, snowboarding, horseback riding, hiking and camping. My main passion currently is running.

From the outside looking in, I am the epitome of perfect health and discipline. I am very strong and healthy for my age. I am a competitive runner/athlete, and often do well for my age group, sometimes even placing in the top tier in races. My most recent race I placed third overall, which was a huge accomplishment as it was my first race following three strokes within the past two years. I have maintained a daily regimen of physical exercise, mindfulness practices, and healthy eating habits since I was 18 years old; my current age is 42. I drink alcohol minimally and never have been a smoker or user of recreational drugs. I have never taken any medications for anything until very recently. I have no family history of stroke or heart disease.

My stroke journey began as a 19-year-old, when I had two strokes. I dismissed the first stroke. My entire left side stopped working. It started with my hand first, then eventually my leg, I couldn’t stand up. I started to lose vision and speech, but I came out of the symptoms very quickly. I felt fine, just shaken up, and I did not see a doctor at this time.

About a month or two later it happened again. It didn’t seem quite as bad this time, but there was a lasting effect on my left arm. Other symptoms resolved quickly other than the use of my arm. I was living in the Outer Banks, NC at the time, and there were no hospitals or walk-in clinics, so I did not see a doctor. It was the year 2000, so it was long before I had access to the internet or a cell phone to easily research symptoms and self-diagnose. I did not have a primary doctor there, and I had no health insurance at the time. It was brought to my attention it could be my birth control causing these symptoms. I called Planned Parenthood for support, and they told me there was no way it could cause these symptoms (even though it says it right on the medication). I stopped taking birth control, found help through my place of work, and finally went to see a doctor in North Carolina. My arm still hadn’t completely recovered a week after the second “incident.”

I was admitted to the ER, and they found two “blips” on my CAT scan. I was told it could be a brain tumor and they might need to operate. The reality of the situation became serious, and my boyfriend (now husband) was with me. The diagnosis came back clear as ischemic stroke, but without any known cause.

The experience I had in that hospital all those years ago was powerful, as I wasn’t treated with respect. I was 19, alone with just a 20-year-old boyfriend to show for myself, no parents or other support. I was labeled “anxious” in the doctor’s notes and thin, neither of which felt true. I have always had a pretty muscular build and am known for being overly calm. I had suffered migraines and was taking birth control right up until the second stroke. I believed it was the cause of the stroke because the doctors couldn’t find any other known cause after five days of intensive testing.

Into my thirties I began having mini strokes or TIAs, but they were impossible to diagnose. I was near certain of my own diagnosis because of my stroke history and the symptoms were always so similar/familiar. My hand would tingle, my face would feel fuzzy and numb, when I would feel a pins and needles feeling. I did head to the ER once with these symptoms and was pretty quickly sent home, told there was no way it was connected to my past history, and was checked only for electrolyte levels because I am known for heavy levels of exercise.

I left the ER with my face and arms still tingling. A few years later I had a very strong TIA that took away my ability to speak for a few seconds. Again, I knew exactly what that feeling was, my speech was affected the rest of the day, and I was shaken up and left work. Later in the day I ended up in the ER again. I was given all the same tests I had passed years ago and passed them again except they did locate a PFO (Patent Foramen Ovale). This wasn’t seen as a risk factor at that time or by my current cardiologist and neurologist. I was sent on my way again being told it could be anxiety or migraine with aura which is normal for women to have especially around their menstrual cycle. One of the only commonalities I have had for all or most of my mini strokes or “migraines” and strokes has been that I get them slightly before or after my period.

Two days after my 40th birthday the big one hit (after years of hiding the symptoms like tingling hands, numb face, confusion, dizziness). I learned to ignore my symptoms because I had been told since I was 19 that I was anxious, it was probably low blood sugar from my activity level, or just a migraine. This time the symptoms were classic: drooping face, lost control of both arms and my left hand stopped working, I lost my ability to swallow, I was having difficulty breathing, and my voice and speech were affected.

I was only in the hospital for two days after this stroke. My left hand wasn’t working, so I set out to rehab it on my own as fast as possible and it worked. Repairing involuntary movements such as the ability to swallow took longer, but my hand only took a few days. I saw a speech therapist once, and I was put on a nectar thick diet for a month because swallowing water or thin substances was challenging and would make me aspirate. Chewing hard foods was also too challenging for a while. To this day they still get stuck in one side of my mouth due to some tongue function loss. I was too strong, however, to qualify for further services. To this day I have to be careful eating and swallowing liquids quickly because I can choke more easily.

I had another stroke two weeks later, landing myself back in the ICU. The PFO that was dismissed as being normal six years before this was now being looked at as the number one culprit of my stroke. I was put on medication this time and was given a statin to reduce brain swelling and Plavix to thin my blood. My experience with the medical system was very serious for the first time.

Cardiologists and neurologists became eager to perform heart surgery at this time (2019). I was relieved to have a known cause after all of these years and strangely excited to feel validated on my TIA history. I had a PFO closure done in November of 2019, was told I would never have another stroke again by my cardiac surgeon, and that I should stay on my blood thinners and aspirin for six months but after that I wouldn’t need to ever take anything again.

I was fine for only a few weeks after surgery when I felt my first TIA symptoms once again. I knew I should have done something about it, but I didn’t. I called my doctors the next day as I had major aura surrounding both eyes, numbness in the face, and I did not know what to do, but I shook it off and returned to work. These symptoms would come and go from month to month and were always happening the week of my period (this was the only one commonality I have
ever found in all of this experience).

I brought these symptoms to my neurologist, my cardiologist, gynecologist, a vein specialist, and my primary care doctor. They all told me these symptoms are normal symptoms women experience around their menstrual cycle, but I was worried they were warning signs again or TIAs.

In January 2021 I had my first and hopefully last stroke (post-PFO closure). I was in northern Vermont snowboarding and far from appropriate care. My dreams of having a known cause became shattered at this moment. I don’t have the space to share the experience of going through yet another stroke during Covid, but it was not ideal to say the least. I lost all ability to talk for about five minutes, my face drooped again, and I couldn’t swallow.

I recovered from this stroke very quickly, which was in some ways unfortunate, as I did not get taken very seriously once I finally got to the hospital, eleven hours after the stroke occurred. The first few hours, thinking and speaking were extremely difficult. I was alone, no one allowed in the hospital by my side to help tell my story, to help navigate how I was being treated. I remember nurses and doctors literally asking why I was there and I could not get the words out about my history, they would quickly leave the room before I could answer their questions. Talking exhausted me, and it had been a really long day. I had a massive stroke a few hours earlier. Although I have been lucky enough to recover quickly from these strokes it doesn’t mean they have been “small” in nature. My neurologist has been shocked that I have suffered very minimal deficits, especially after the last one.

I have again gone through every test known to modern day medicine. I have gotten second opinions, including from Mass General in Boston. I believe in my heart I am now stabilized on the medication I am on and hope I do not experience any further stokes. I am grateful every day to be here functioning so completely and am searching for ways to support other survivors, especially women and or young stroke survivors that have difficulty mitigating the medical world.