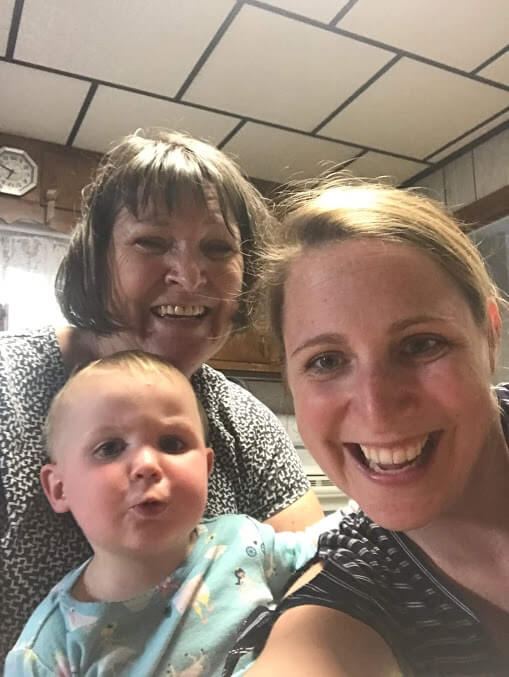 During the summer of 1997, my life changed forever. I had been living with severe headaches for several years. They would wake me up in the middle of the night and I was always holding the back of my neck; sometimes it would get so bad I would lie on the floor and cry cradled in my husband’s arms while he felt helpless not being able to alleviate my pain. I went to several doctors and was told it was stress. That summer, the right side of my body felt numb and the left side of my face felt tingly. I called my doctor, but he was on vacation. I went in and told my story to his associate, expecting to be sent away with a couple of pain pills. Instead, they ordered a CT scan.

I went in praying that they would find something and the CT scan showed a giant aneurysm on the basilar artery of my brain. According to the doctor, it was considered giant because it was bigger than 2.5 mm. I was immediately referred to a neurologist in Lewiston who ordered an MRI and then referred me to a specialist in Boston. I went to Boston and was seen by the director of cerebrovascular surgery. I thought when I went down they would keep me and immediately take care of the aneurysm. Little did I know that it would be the first of many emotional appointments. The doctor didn’t like the looks of the aneurysm and said it couldn’t be treated with standard procedures due to its location and the aneurysm protruding out of both sides of the artery. I was told that it could burst at any time and to take it easy; I felt like a walking time bomb.

In the beginning of December the doctor called with an idea. They were going to do a test and if I could pass this test my doctor would consider doing the operation. However, they were skeptical of my chances of passing, as I had very tiny arteries. I had to be awake answering questions and if I could last for a certain time period I would pass. When I passed, everyone in the room started cheering. The date for the operation was set for December 19, 1997.

From the moment I was diagnosed, I had so much support from family, friends, and coworkers; the whole community was there for us. My wonderful co-workers even organized a benefit supper to raise money to help defray some of the medical costs associated with my stay in the hospital. On December 18, after a lot of hugs and well wishes from my beautiful children, I left for Boston with my parents and husband Gary, planning to be there for five days and returning home in time for Christmas. I was told about all of the risks including the possibility of stroke and death.

My operation had never been done before. The plan was to reverse the blood flow to my brain and clip both sides of the aneurysm on the basilar artery. The operation was completed and the surgeon was satisfied with its success. Six hours later, due to not enough blood getting to a certain part of the brain, I had a massive stroke. I was not able to move my right leg or arm. It also affected my breathing and speech. I was in the ICU for about a week and they told my family they were not sure I would pull through. They put in a tracheal tube as well as a feeding tube. I was hooked up to all kinds of machines. I don’t remember much about being in the hospital.

I spent one month in Boston recovering and was then transferred closer to home, where I spent another month in rehabilitation. I look back now and read the diary that my parents kept and am reminded of how lucky I am and how far I’ve come. One excerpt in the diary says “Debbie sat up for 30 seconds.” I had to learn to talk and eat again. I had been on a feeding tube for so long I was down to about 90 lbs. I was allowed to go home the middle of February.

My life as I knew it was over. I had to rely on others to take care of me. I was told that I might never be able to walk, talk, and even drive. My daughter was 13 and my son was 16. One of the hardest things to accept was having them help me rather than me taking care of them. Our roles had reversed. My life before my injury was very active—running with the kids to their games; going camping; and doing crafts such as knitting, making baskets, tole painting-on-wood cutouts.

Prior to my surgery I worked as a teller at a local credit union. Several weeks after my release from the hospital I called work and asked when I could return. I was devastated when they told me I no longer had a job. My right arm was still affected, as was my voice, but it was difficult to accept that this part of my life was over. I began physical therapy close to my home and eventually got out of my wheelchair and walked with a cane. I was encouraged to always give a little bit more and my endurance and balance started to get better. I was still having difficulty with my speech. At this time I had terrible breath support and my voice was very nasal. I was self-conscious and would not talk on the phone. After about a year my therapist was talking about discharge because insurance would not keep paying, I felt I still had so much more progress I wanted to make: I wanted to go back to work and drive, and I was having such a hard time accepting what had happened to me.

I met an old acquaintance who had also suffered a stroke and was attending a local neuro-rehabilitation facility. I soon began my therapy at this facility; I received speech, occupational, and physical therapy. I attended many group sessions and this gave me the opportunity to interact with other brain injury survivors. I felt that I finally found people who understood what I was going through. I was not alone! Everyone seemed to believe in me and encouraged me to try just a little bit harder and not to give up. In speech therapy, they not only worked with my voice, but also with my word finding and memory. They taught me ways to compensate by using a day timer and writing everything down. They also encouraged me to sing to make my voice stronger. When I began my therapy I was pretty depressed and ready to give up. With the counseling I received and everybody working on my goals I had newfound hope and thought about finding work.

I couldn’t imagine just sitting at home; I was too young—just 38-years-old when this happened. I had a driver’s evaluation which recommended that I have a left foot gas pedal installed along with spinner knob for my steering wheel. It took much practice and repetition to adapt to the left foot gas pedal. With the assistance of vocational rehab looked for a clerical job using my one-handed keyboard.

One day the program coordinator at the therapy program I had attended called and asked me if I would consider working there as a peer support rehabilitation technician. I thought she was crazy, but I was encouraged to come in and interview. In July of 2000 I began training and then working 32 hours per week. I think this is one of the best things to come out of me having my stroke. I worked one-on-one with individuals where I listened and shared my experience. Clients have told me that it is good to talk with someone who has been through a similar experience as we are able to fully understand each other because it is impossible to just imagine having a brain injury. I also facilitated a one-handed group, educating individuals like myself to use adaptations to complete one-handed activities. It is very rewarding seeing clients meet their goal and knowing I had some part in their progress.

I had worked in this position for 16 years when I fell and broke my humerus bone in my unaffected left arm. I was devastated. I was not able to walk or get myself from a seated position to standing. I felt like I was back to square one. I had plans to go on a trip with my parents and siblings to Alaska for two weeks, and fortunately, with my family’s help, I was still able to go.

After over a year of therapy, I was finally able to begin taking care of myself. I had thought my arm would heal in maybe six weeks and I could return to my everyday tasks and work, which I missed dearly. After a year I was still having difficulty with fatigue and driving, and my job was almost a one-hour drive each way, so I made the hard decision to stop working. I continue to co-facilitate a brain injury support group in my area and continue to serve on the BIAA-ME Advisory Board. I try to exercise every day to keep my strength up. I am always in search of new therapies, which may help improve my physical functioning. I have recently been involved with a study involving music therapy and have found it very beneficial.

Progress does not end once you finish your therapy. It is a lifelong journey. It has definitely been, and will continue to be a journey, and one I could never have done alone. I’m blessed to be able to help others in their journey as others have helped me.