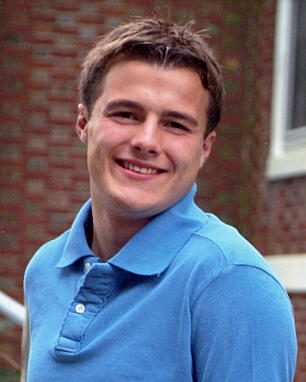 Michael T. Goulet was born September 30, 1989 and he was a vibrant, funny child who loved to make people laugh. On February 15, 2003, at the age of 13, Michael was in a devastating snowmobile accident. His snowmobile went off the trail and the collision broke his helmet, leaving Michael with a severe traumatic brain injury.

A passing cross-country skier who was also a doctor had the Life Flight number in her cell phone and started CPR on Michael. Michael traveled by Life Flight to Eastern Maine Medical Center in Bangor, where he spent three weeks in a coma fighting for his life. He was eventually transferred to Maine Medical Center to be closer to his family’s home in Saco. At many times, Michael’s family was unsure if he would survive as he battled unstable intracranial pressure, multi organ system failure, and numerous complications. After five weeks, Michael spoke his first words. He continued to recover and was discharged from the hospital on May 3, 2003.

After leaving the hospital, Michael was started on a prophylactic regimen to prevent seizures and was eventually weaned off the anti-seizure meds. On October 15, 2004, when Michael was 15, he had his first grand mal seizure. Michael continued to struggle with seizures and medications for many years, until he eventually went off of them for good after a sleep study in the summer of 2010 showed no sign of seizure activity.

Though Michael’s doctors indicated that there was a risk of future seizure activity, the severity of the risk was unclear. Michael improved dramatically after stopping the medication and his family finally felt like they had gotten Michael back. Michael also felt like himself for the first time in years. He became involved in ministry work and pursued psychology studies at St. Joseph’s College in Windham, Maine. He planned to continue with graduate work and hoped to help others who had faced struggles similar to his.

On October 6, 2010, Michael had his final grand mal seizure. He passed away on October 14th from complications from the seizure at the age of 21.

In the aftermath of Michael’s life, miraculous survival, and untimely death, Michael’s family established the non-profit Michael T. Goulet Traumatic Brain Injury & Epilepsy Foundation in 2011. The all-volunteer board includes many of Michael’s family members, his father, Brad, sisters, Danielle and Candace, and brother-in-law, John. Initially, the focus of the foundation’s efforts was on awareness, prevention, and research for improving treatment, but over the years the focus has narrowed to prevention.

The Goulet Foundation provides free helmets (along with individualized fitting) across Maine, and they gave out over 3000 helmets in 2018 alone. The foundation has also started to train community bicycle public safety officers to fit helmets and have successfully done so in the towns of Westbrook, Biddeford, and Saco. In addition, the foundation provides scholarship support to students at St. Joseph’s College and the University of New England. As a result of the foundation’s commitment to injury prevention, it has received support from many organizations including the Heisman Foundation Trust.

For the first few years, the foundation held a charity celebrity hockey event to raise funds for its programs. Now, each winter, the foundation organizes a gala to celebrate the organization and its volunteers, as well as raise money to continue providing helmets. The 5th Annual Michael T. Goulet Foundation Gala will take place on Saturday, March 23, 2019, at the Landing at Pine Point in Scarborough. To learn more about the Michael T. Goulet Foundation and their remarkable story, please visit www.michaelgouletfoundation.org/ for more information.