The Hike for Hope
Just a Guy on the Trail

Guy Pilote is known by family, friends, and the community as a hard-working, kind, generous, and occasionally stubborn man. Born and raised in Lewiston, Maine, he has spent his life in service to his hometown. The only time he ever really went away was when he felt the call to serve in the United States Army. 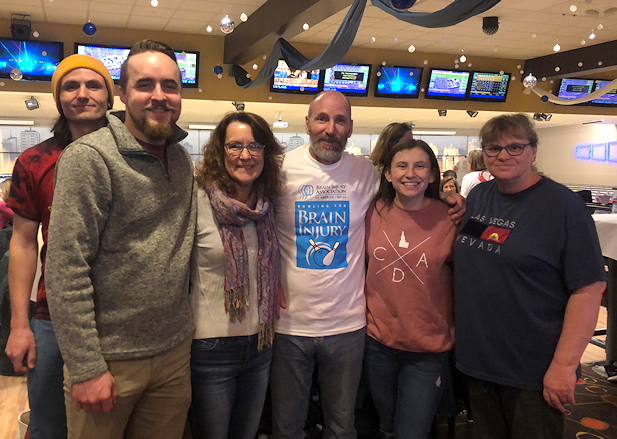 Guy was a police officer in Lewiston for ten years, and was recognized nationally for saving the life of an infant who was trapped when a fire destroyed her family’s home. Guy became a firefighter for the city of Lewiston, and served in that capacity for fifteen years. Prior to his retirement, he purchased a building-moving business from his brother-in-law.

Guy has always taken good care of himself, eating well and exercising daily. At the age of 49, he was in excellent health. On October 8, 2014, after a 3-mile run, Guy suffered a catastrophic left ischemic stroke. Everyone was shocked, as he had no underlying risk factors. It is believed that an injury he sustained two weeks prior to his stroke likely caused a clot which traveled to his brain during or shortly after the run.

Family was informed not to expect too much in the way of Guy’s recovery. A large portion of the left hemisphere was damaged, and doctors were not sure that he would walk, talk, or use his right hand and arm again. But Guy’s stubbornness paid off, and after intensive therapy he returned to work, lifting, moving, and constructing buildings. He still has limitations with his right hand and experiences aphasia, but Guy finds ways to work around these obstacles.

Guy made many good friends in therapy, and has participated in the Bob Burns Memorial 5k, and in bowling to raise money for the Maine Chapter of the BIAA.

Guy has experienced first-hand the stigma associated with brain injury. Some people speak to him as though he is less intelligent. One restaurant manager called the police because she thought he was intoxicated. Guy has never held a grudge, nor has he complained about his condition or circumstances. He appreciates every day he has been given, and wants everyone to know that there is life after brain injury. There is always hope.

When Guy told his wife that he wanted to hike the Appalachian Trail, she was not at all surprised. He has the determination, intelligence, and strength to complete the 2,190+ mile hike. A week later, he told her he wanted to use this hike to raise awareness and money for the Brain Injury Association of America’s Maine Chapter.

Any contribution you make to his journey will go to the Brain Injury Association of America’s Maine Chapter so that they may continue their good work of offering help, healing, and hope to survivors of brain injury and their families. To donate to BIAA-ME through Guy’s campaign, visit: http://www.biausa.org/guypilote. Donations to Guy’s fundraiser can also be made by sending a check to BIAA-ME, 126 Western Ave #261, Augusta, ME 04330 with “in honor of Guy Pilote” in the memo.