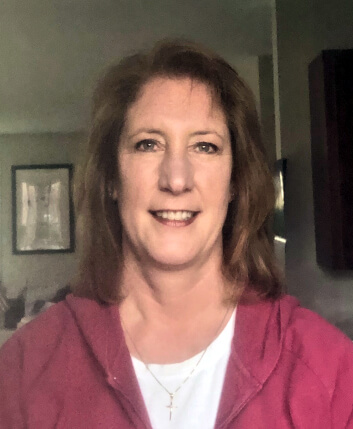 My name is Rachel Glaser and I suffered a traumatic brain injury in August of 2004. My boyfriend at the time was using drugs and wouldn’t move out of my home. Things escalated after many nights of arguing about his leaving and my boyfriend strangled me in front of my four-year-old son. When he released his grip from my throat, I fell to the floor, unable to move by body, essentially paralyzed. I have no idea how long I couldn’t move my body for. I eventually called the police and when they arrived, they called an ambulance to take me to the hospital.

As a result of my boyfriend’s attack, I suffered whiplash and spinal cord compression. The neurosurgeon explained that if I did not have spinal fusion, my injuries would result in paralysis. I went to work the following day as if nothing happened. However, a lot had happened. From the effects of strangulation, I had a compressed spinal cord, nerve damage, and a brain injury that took me nine years to actually accept. After the assault, in my attempt to stand, I sprained my ankle. Trying to help my son heal from PTSD and knowing that I could be paralyzed was more than enough to handle.

I was also working a very stressful job. After the assault, I struggled to perform well. I struggled with short-term memory, difficulty learning new things, and auditory sensory issues. I was a little irritable and easily overwhelmed. I would get dizzy if I turned my head around to talk to someone if I was walking, and I had balance issues. I, however, was in denial that I suffered a brain injury. I was always tired and drank coffee all day to stay awake. I had to drag myself out of bed in the morning and I went to bed as soon as I put my four-year-old to sleep. I had to push myself as hard as I could to carry on. I was a single mother working full time with no assistance from anyone! Housework took longer for me to do, so I never had down time. I canceled social engagements because I didn’t have the time or energy.

In 2006, I gave birth to his child. I felt that all of the secrets were being exposed because everyone comes to visit you and see your baby. I couldn’t hide anymore. In the delivery room, my blood pressure rose to a deadly level for me and the baby. The nurse asked certain people to leave the room and she put me on oxygen. The baby and I could have died.

That was the second lack of oxygen assault on my brain and this time, I couldn’t hide it. When I would turn my head around, I would fall to the ground. One time I was holding the baby and I fell but landed on my kneecaps to protect the baby. That hurt so badly and it fractured some bones as an MRI showed years later. I had balance issues just walking, and when stressors hit, I would dissociate from my body, as I couldn’t physically handle the emotional pain. I would be overwhelmed with laundry and dishes, and feel faint when in the presence of my ex. My short-term memory was depleted even more. I couldn’t remember how much my baby weighed or what time he was born. Numbers now jumbled in my head and I couldn’t say his birth date with the year correctly. All I wanted to do was sleep.

The nurses and doctors checked my blood pressure for days and weeks after my son was born. I still did not accept the brain injury. I knew I couldn’t go back working my stressful, multi-tasking job, though. I tried to demote myself by interviewing for lower positions in the company but since my speech and words were jumbled, I was not hired. The interviewers said that on paper they would hire me, but my interview was so poor that they couldn’t. I went to human resources and told them that unless they could give me a different job, I was leaving. I called the disability department and they couldn’t promise anything but I had no option but to walk out.

Six years ago, I had to accept the fact that my brain didn’t work and try to get help. My older son had fallen at school, lost consciousness and suffered a concussion. I was going back to school for graphic design and in my first class I was taking an open-book exam. I had to leave in the middle of the test to pick him up. With strong emotions my brain shuts down. I was unable to go back and complete the open book test! I tried several times and I was unable to do any of it. I had to accept the professor withdrawing me from the class and Voc Rehab closing my file, as I wasn’t ready to perform in school or back to work. I had always been a good student and I knew it was my brain not functioning if I couldn’t complete an open book exam.

I tried working different jobs. I worked in the woods with my cousin “piling sticks” as they call it! I was piling 4-foot, cut oak trees with a pulp hook. I did prefer the woods to an office! I worked with a friend cleaning houses. My father was livid! He paid for me to attend college and have a good life. I grew up with a cleaning lady and now I was one. I was trying to work a job that paid well for the hours I could sustain, and cleaning houses pays well. Due to my nerve damage, the motion of vacuuming and mopping made my right arm go numb. That was very scary! With help from my Occupational Therapist and Recreational Therapist we figured that since I love animals, I could start a dog-walking company.I have a few clients but I get physically exhausted.After referrals to many doctors, an endocrinologist finally diagnosed me with hypothyroidism and a growth hormone deficiency due to my brain injury.

My most recent neuropsychological exam showed I have attention deficit disorder as a result of my brain injury. My executive functioning skills are greatly reduced, I have auditory sensory issues, and my manual dexterity is completely compromised. I have lost sensation in areas of the right side of my body from permanent nerve damage.

I was approved for the brain injury waiver program and I was assigned a very helpful case manager. She suggested that I apply for a seasonal position at L.L.Bean in customer service. The employee health nurse agreed to give me a chance and limited my hours to four a day and that saved me! The training was awful! Things that were once so easy for me were so hard. I didn’t think I was going to graduate from the week of training but I did. The job took a very long time to grasp. After several months it finally clicked!It was nice to feel a part of an employee network again and have corporate benefits. The pay was $11.54 an hour. Thirteen years ago, I made $25.00 an hour. Thirteen years ago, everything came easy to me and I thrived.I stayed up late and had a social life on top of working and raising a child. Now, I can sleep endless hours and I only have the capacity to manage my sons’ basic needs.

The invisible injury is not invisible to my children. I lose things, I forget things, and I can’t handle much stress at all. I am fortunate to have the assistance from people who work in the field of brain injury support!I have come a long way but I still have a long way to go. I miss the ease and fluidity of a normally functioning brain. As a former college athlete, I miss the energy and coordination I once possessed. I do know that I am lucky to be able to walk. I also know that it’s a miracle I’m alive.I just started going to a brain injury support group and I attended the brain injury resource fair. I started doing Love Your Brain yoga and have started craniosacral therapy, which has made an enormous difference in how my body feels. With the support of other survivors, the struggles seem to lessen and knowing you’re not alone is definitely helpful. I wish there was more medical knowledge to help heal the brain. Ideally one day there will be!