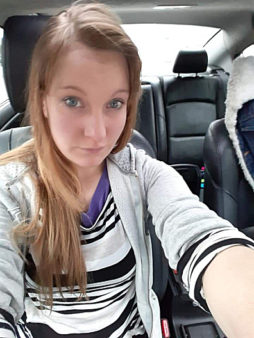 7, 2011, when I was 20 years old, my friend and I were on our way out. Around eight o’clock at night on the intersection of the Works road and the Valley road in Jackson, we hit a patch of black ice. My car swerved, went off road, and did a 360 to get pinned against a tree in a ditch that at the time was unseen from the road. My passenger sadly passed away on impact due to a previous neck injury.

I was unconscious and frozen alive overnight with my head and neck fractured; my Glasgow Coma scale was six. My car was recovered over nine hours later; the next morning a local wood cutter was able to see it and get help. The only reason I am still alive today was because being frozen kept my blood inside my body through the night. I was found with a collapsed lung, unrecognizable face, pneumonia, and nerve damage from being upside down for so long.

After different medical professionals helped keep me alive and from going into shock, my body temperature was so low I needed to be warmed up from the inside. I was then life-flighted to Eastern Maine Medical Center (EMMC) in Bangor. Not long after my accident, construction was done on that road, since many accidents had been on it in the years before.

The recovery from my car accident and traumatic brain injury was remarkably fast in the words of my doctors; being young and in college, my brain had good elasticity. I spent one month to the day at EMMC. Once I was strong enough, I started speech, occupational and physical therapy I started to re-learn all of life’s basics again such as how to chew, talk, and how to walk. At the time,  all I was thinking about was getting better so I could back to school and back to the printing lab.

After a month in the hospital, I went back home in a wheelchair and neck brace to finish the rest of the required therapies closer to home. A few more months of speech, occupational and physical therapy at Waldo County General Hospital flew by all while I did not register any of the physical pain from my injuries or the psychological pain sustained from such a bad accident. I only believed I needed to be back at Central Maine Community College in Auburn.

Though my mother had warned me, against her advice, I only missed the semester during which my accident happened, and went right back in September to finish. I did not think of the struggles I would have to face, and I don’t think I was thinking at all. After all I accomplished in the face of the trauma that changed my life forever, I graduated from CMCC with an Associates Degree in Applied Science for Graphic Communications on May 7, 2012.

I decided the next step in my life only one year after a bad accident and graduating from college, was to continue being a student. I then enrolled at the University of Southern Maine in Portland/Gorham. I studied the field of camera production and took classes in film studies. After two semesters there of pushing myself past my limits to socialize, be on time, prepared, and pass all my classes, I decided while on break to stop taking the online classes I was signed up for and to not go back to school.

Between the end of 2013 and 2016, I maintained a part-time, then full-time job at a local general store, Troy General. I pushed myself to make sure what I did was the best and nothing was left undone. I suffered in silence, all the time working though how I felt. In 2016, I got my driver’s license back. In February 2017, I started working for OnProcess Technology, and to the present day I am still a customer service representative there. For the first time since my accident, I have health insurance through work. Figuring out a better way to live will not be easy, but it’s never too late, and now with an advisor, counselors, going back to therapy, and with doctors along my side, though it does not come easy, I have hope for a better future.