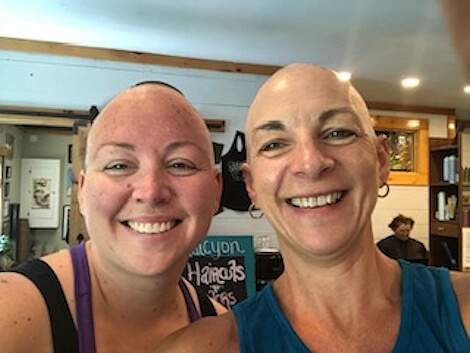 To be given a brain tumor diagnosis is devastating.To survive surgery, complete a year of treatment and be told again five years later that your brain tumor has returned is life altering.While working through the many emotions this diagnosis brings up, life as they know it as well as those around them is forever changed.It has been my goal to hold on to hope for my daughter.

When folks ask me how my daughter is doing, my response is “She has her good days and her not so good days.” I believe that applies to all of us.Under the best of circumstances we have good days and bad days.For individuals living with a life threatening illness the perception of a good day can be pretty simple.The hope is that the good days far outweigh the not so good ones.

Jessica Heath was 28 when first diagnosed with anaplastic astrocytoma in 2012 and had a quarter of her brain removed.At 34, it showed up in a more delicate spot believed to be inoperable at first.However, she underwent surgery and two rounds of chemotherapy only to discover at her first follow up MRI, the tumor had grown back.The MRI was performed earlier than expected only because she was changing oncologists.In an effort to keep her life less stressful she was referred to a neuro-oncologist who was 30 minutes closer to home.This reduced driving time to medical appointments and this neurologist could also manage her seizure medications since she would always be at risk for seizures. The new oncologist followed her through her 6 weeks of radiation, but the next follow up MRI showed a new tumor had grown in a new area; the cerebellum.This was likely the cause of the dizziness and double vision she was having.

The goal I set for myself during her recovery from surgery was to maintain as normal a life as possible for me, her, and all of our family.That, of course, was the challenge.In the beginning it was a challenge I was up for and still am though along the way I have learned a few things I wish to share with those in a similar situation dealing with a loved one with a long term life threatening illness.

For me, each day is a new day and I must leave behind whatever happened yesterday to start fresh.I take pride in “managing” things in my personal and work life, but with so many uncertainties I quickly learned that I needed to let go on some level and allow things to unfold.This in no way meant I was giving up hope that Jessica would survive.We were told that her tumor was treatable, though not curable so yes there were days when my faith was less solid than other days.I cried, but often not in front of her.I found safe people to cry with and needed to allow people to help me and to help her.

Even on those not so good days (or weeks), I worked to hold on to hope.There was a time after Jessica completed her first 6 weeks of radiation and was on a four week break between treatments.She was exhausted and sleeping a lot.This didn’t surprise me as much as her pulling away from us even when she was present.She had little or no interest in doing anything other than sitting in front of the TV.She was not engaged with her boys.She had no desire to do anything around the house or help with meal preparation.Despite my love of cooking, she had no interest in helping in the kitchen.For weeks I found myself researching and talking with the nurse navigator and the social worker at her oncologist’s office to find something that would pull her out of this funk.I was able to find some services but she was not interested in moving forward with anything.

The turning point for me came 10 months after her re-diagnosis and I was out of town.She was to begin another short round of radiation and a new treatment of immunotherapy. We anxiously waited nearly two weeks to get approval from the drug company.I had hesitated to go away as if my staying would make a difference. She was no longer working or driving due to her vision and dizziness and was somewhat isolated at home.Physical therapy came to her to work on balance and safely getting around in her home.Meanwhile, my husband and I were traveling.We had set up some meals to be delivered by friends and coordinated rides to her appointments.Jessica and I communicated by text each day to ease my mind that she was doing ok and getting where she needed to be.The week went by and all was well when I returned.I came back more rested and she felt accomplished.There were still days when she didn’t answer her phone or get off the couch, but soon we saw her getting antsy to be outside watching the kids play in the yard or getting to a football game.Soon she was on the phone with a friend having a conversation rather than just communicating through text message.She was more involved in her life. This is what I hold on to.These were the good days.