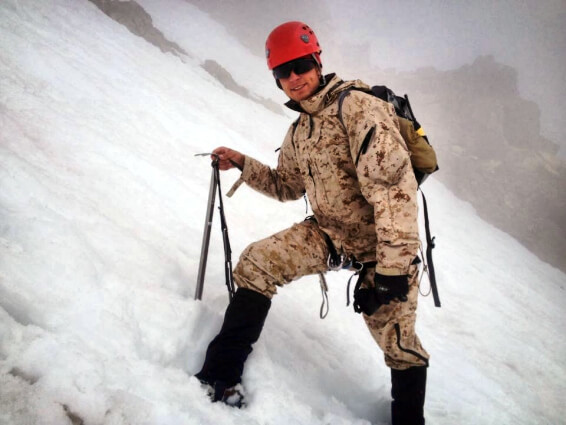 My name is John Nelson, Sgt USMC retired, MOS Rifleman. I strive to not let my brain injury define me, and I want to share my story in hopes that it makes a difference in someone’s life and to give hope to survivors and families of brain injury.

In my life before my brain injury, I was married with an 11-month-old baby girl, and in the U.S. Marine Corps. I loved to be outside kayaking, mountain biking, fly-fishing, telemark skiing, mountaineering, and rock climbing.

I was the face of the Marine Corps as a member of the Silent Drill Platoon for my first three years of service, and I traveled the U.S. and abroad and was in two commercials.

I was a Mountain Warfare Instructor and I served for ten years before they retired me. My duties included training Marines to rock climb and telemark ski, as well as develop survival, wilderness EMT, and mountaineering skills. I was sent on orders to lead an expedition to summit Mount McKinley, and I completed the mission by leading four out of eight Marines to the summit during the coldest conditions in 20 years. I also served one tour of duty in Afghanistan in 2011-2012.

My injury happened on my birthday, April 11, 2015. I went to the only restaurant on base and sat at the bar to have dinner. Two other Marines whom I did not know well approached me. When they found out it was my birthday, they bought me a few drinks. I left the bar and the two guys said I was running and then fell. I don’t have any memory from a month before to three months after my accident, so this is all hearsay. My doctors say it’s impossible for me to have this much damage from a fall off a 13-inch embankment, but it’s their word against a guy without a memory.

I was brought to the hospital with a Glasgow Coma Scale score of three. This is the lowest you can go before death and the worst prognosis. All four quadrants of my brain were damaged and my skull was completely shattered, which allowed for the swelling of my brain. I was in a coma for two and a half weeks. My family was told during that time that they didn’t know if I would make it.

I spent six weeks in Reno, NV, in the ICU Trauma Unit. I was told I would be paralyzed on my left side and would never walk again. The Marines sent me via private jet to Richmond, VA. There, I was in a Head Injury Trauma Unit for two months before being transferred to the Inpatient Polytrauma Unit for the rest of my 11-month hospital stay. During this time, I had to learn how to walk, talk, eat, and swallow.

My life changed dramatically after my brain injury. I learned that my wife was taking advantage of me after the injury. I had to fight for everything early on. I had to fight to walk, talk, eat, and think. I went to many therapies including PT, OT, speech, swallowing, recreational, and driving. I have deficits now, and I know I will never be what I was before and that I will be going to therapy off and on for the rest of my life.

I have a hard time following difficult tasks, my short-term memory has been affected, and my drive and energy are diminished. I also have seizures and I no longer have peripheral vision or a sense of smell. I need help making sure I’m understanding new tasks and I must be on guard because some people take advantage of people in my condition.

I had to accept that I was not the same person I was before my brain injury, and that I have a different life. I divorced my wife and fought to prove I could be a dad to my daughter, and I now have 50% custody. I have one friend that I am in contact with on a regular basis, and no real social life. I have a hard time socializing with new people and prefer to be with my family. People don’t understand my injury the way they would if I had my leg cut off; because my injury is invisible, people think it doesn’t exist. People pass judgment on me and think I’m lazy and that I should be fine and just go out and live my life and work.

I now spend time sharing my story to help other brain injury survivors and families. Before moving back to Maine, I participated in the Brains At Risk program through the Brain Injury Association of Massachusetts. I hope to start working with the Wounded Warriors Project soon, as well as offer presentations to Maine brain injury support groups.