Humans, for almost as long as we have existed, have been making and listening to music. Archeologists have discovered man-made drums and flutes that are believed to be more than forty thousand years old. Music remains an essential part of the human experience today, and we are all familiar with its unique and profound effects. It has the ability to motivate us, trigger our emotions, transport us to different times and places, and quite literally help us heal. Using music in rehabilitation is at the heart of the work at MedRhythms, a Maine-based digital therapeutics company that uses sensors, software, and music to address walking deficits caused by neurologic injury and disease.

Neurologic Music Therapy (NMT) is a research-based system of standardized clinical techniques for sensorimotor, speech, language, and cognitive training. These treatment techniques are based on the scientific knowledge in music perception and production and the effects thereof on nonmusical brain and behavior functions. Populations served by NMTs include stroke, traumatic brain injury (TBI), Parkinson’s disease, multiple sclerosis, and others. Therapeutic goals and interventions address rehabilitation, development, and maintenance of functional behaviors (Thaut, 2015).

Neuroscience research has shown that music has the ability to simultaneously engage multiple regions of the human brain (Peretz and Zatorre, 2005). Additionally, there is profound evidence that engaging in music can aid in neuroplasticity (Moore et al., 2017). Neuroplasticity is a natural process by which the brain creates and strengthens internal connections, and it is the reason brain injuries can heal. NMTs witness neuroplasticity in action in clinical settings every day. They frequently see people who sustain neurologic injuries that result in walking problems begin to walk faster, farther, and more efficiently after receiving NMT for several months. This important research has set a foundation for how music can profoundly affect recovery from neurologic injuries and diseases.

Over time, clinicians began to notice that patients who received NMT recovered faster than with the standard of care alone. Patients noticed the dramatic improvement, too. Unfortunately, those receiving NMT often had to discontinue the treatment regardless of whether they showed functional improvement. Sometimes the discontinuation of treatment was due to the cost of therapy, as NMT is primarily funded out-of-pocket. Sometimes it was due to patients relocating and no longer having access to NMT services. There are millions of people who could benefit from NMT and only approximately 3,000 therapists worldwide with NMT training. Therapists turned to the field of digital therapeutics for solutions.

The digital therapeutics industry is made up of companies that develop evidence-based therapeutics through technology, including hardware and software programs. MedRhythms, founded by Brian Harris, therapist, and supported by Owen McCarthy, entrepreneur, is in the process of developing its first digital therapeutic, a prescription software system that uses 3D motion sensors and music to support the walking rehabilitation of adults with neurologic injuries or diseases, such as stroke. Walking rehabilitation has been the focus of this digital therapeutic because it shows the most quantitative, dramatic improvements when using music to improve walking. This intervention is known as Rhythmic Auditory Stimulation (RAS). There is substantial evidence that walking in sync with a beat can help those with brain injuries and neurological diseases walk faster, longer, and more symmetrically (Thaut, 2013). 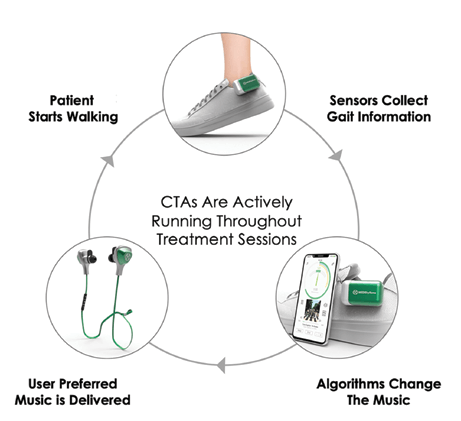 The MedRhythms digital therapeutic system is designed to replicate RAS with a mobile app, sensors that attach to shoes, and headphones that play personalized music. Users walk to the beat of the music they hear as an algorithm, and embedded sensors take in data and change the music in real-time according to the RAS protocol. Depending on how well the user is able to walk to the beat, the algorithm augments the tempo and rhythmic structure of the song being played through the headphones to drive users toward improved clinical outcomes.

The goal is for this device to make the benefits of NMT accessible to all who need it. It is designed for in-clinic use by physical therapists who are not trained in NMT as well as for in-home use without the need of any kind of therapist present. Along with developing this walking-focused product for stroke survivors in the chronic stage of their recovery, MedRhythms will continue its work toward gaining FDA approval, making this reimbursable by insurers, and commercializing the device as soon as possible.

This digital therapeutic for post-stroke walking deficits is just the beginning as there are many other patient populations that could benefit from RAS. These include those living with TBI, Parkinson’s disease, multiple sclerosis, and Alzheimer’s disease. In addition to improving walking function, NMT techniques are effective in helping people with certain neurologic injuries and diseases to regain language and cognitive skills. The possibilities are endless, and the work has only just begun.

This article originally appeared in Volume 13, Issue 4 of THE Challenge! published in 2019.