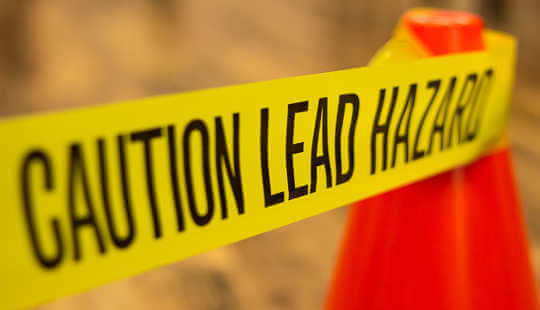 “We are accustomed to look for the gross and immediate effects and to ignore all else. Unless this appears promptly and in such obvious form that it cannot be ignored, we deny the existence of hazard. Even research men suffer from the handicap of inadequate methods of detecting the beginnings of injury. The lack of sufficiently delicate methods to detect injury before symptoms appear is one of the great unsolved problems in medicine.” -Rachel Carson, Silent Spring

Lead is one of a number of neurotoxins present in our world today. Its effects on the brain are similar to those of others in the same category – metals like mercury and aluminum, plasticizers such as BPA, chemical solvents, pesticides, and some types of mold, to name a few. Dorland’s Medical Dictionary for Health Consumers defines neurotoxins as “substances that are poisonous or destructive to nerve tissue.” Neurotoxicity occurs when exposure to these substances alters the normal activity of the central nervous system and damages nervous tissue. According to the Centers for Disease Control and Prevention (CDC), most people have accumulated some degree of toxic pollutants in their bodies, including pesticide residues, toxic metals, and flame retardants. This toxicant exposure brings with it a slew of health ramifications, including neurodegenerative and neurodevelopmental issues throughout a person’s life.

Bans on leaded gasoline began in the early 1970s, and lead-based paint bans followed shortly thereafter. By the end of the 20th century, most people believed the “lead problem” had been solved. Lead poisoning moved out of the spotlight and into the periphery of public consciousness. And there it remained until January 5, 2015, when Michigan Governor Rick Synder declared the city of Flint to be in a state of emergency. Less than two weeks later, President Barack Obama declared a federal state of emergency, authorizing help from the Federal Emergency Management Agency and the Department of Homeland Security. Though acute lead poisoning has become increasingly rare due to public health campaigns as well as a reduction in commercial usage, chronic exposures to low-levels of the metal are still rampant. Lead poisoning is not a threat of the past. It is a current, real danger.

In April 2014, the city of Flint switched its water source from the Detroit Water and Sewerage department, which supplied treated water from Lake Huron and the Detroit River, to water from the Flint River – water that had not been properly treated with corrosion inhibitors, so that corrosion from the system’s lead pipes allowed toxins to be leached into the public drinking water. Though the water supply was eventually switched back to Detroit’s system in October 2015, the damage had already been done. The interior of the old lead pipes had broken down and released poison into water destined for human consumption. Chief among those affected were an estimated 6,000-12,000 children. This is particularly alarming, as the developing brains of children make them the most susceptible to initial harm and serious long-term ramifications of lead poisoning.

Unfortunately, the situation in Flint is not an isolated case. The city’s prime risk factors – timeworn lead pipes and service lines that supply homes with water, as well as interior plumbing containing lead – are shared by other communities across the nation. More than half the housing units in America were built before 1980, meaning that they are likely to contain at least some lead plumbing. According to the Agency for Toxic Substances and Disease Registry, nearly one in every four children under six years of age in the US has at least a low level of lead in the blood. Given that testing procedures and enforcement are inconsistent at best, lead contamination may be even more widespread than we know.

Both the Environmental Protection Agency and the CDC stress that there is no safe level of lead exposure for humans. Despite this, a recent USA TODAY Network Investigative Report found that excessive lead levels were present in almost 2,000 water systems across the country, affecting the water supplies servicing almost six million people; roughly 350 of these systems supply water to schools and daycare facilities. This statistic is perhaps the most alarming, as children’s bodies absorb lead at a much faster rate, and the exposure will have a much larger impact on their growth and development as a result.

Is it really that bad?

Lead is a chemical toxicant, which can cause major damage – especially in developing brains. Newborns and young children have the greatest health risks and will suffer lifelong problems both intellectually and physically following exposure to the toxin. Studies show that lead exposure leads to reduced IQ in children, and this reduction in IQ carries on into adulthood. It also causes attention deficit disorders and has been linked to both Parkinson’s disease and, more recently, Alzheimer’s. There is consistent literature demonstrating that children are at risk for developing emotional and behavioral problems following even mild exposure. Lead poisoning during childhood undoubtedly poses a significant threat to healthy development.

It is important to note that all levels of lead exposure have adverse effects on the central nervous system. Evidence suggests that if this exposure happens early in life, it can cause neurodegeneration later in life. Like some other types of brain injury, chronic low-level lead exposure is difficult to diagnose. Slightly elevated blood-lead levels often do not produce specific signs or symptoms, and few physicians think to test for toxicity because exposure is generally perceived to be a rarity. Lead has been called a “silent toxin” in much the same way that traumatic brain injury has been referred to as the “silent epidemic.”

How it works – The Blood-Brain Barrier

The blood-brain barrier (BBB) is a network of cerebral blood vessels that prevents toxins and other dangerous compounds from reaching the brain and affecting the central nervous system. It acts as the brain’s dedicated security system, separating the circulating blood in the body from the brain fluid. There are some substances, however, that can penetrate the BBB and cause irreparable damage to the central nervous system. Lead is one such substance. Not only does it break through the BBB, it also increases its permeability, thus leaving the brain vulnerable to other toxic substances.

When the BBB is exposed to high levels of lead concentration, fluid can accumulate and cause cerebral edema. This leads to extreme intracranial pressure, which can result in encephalopathy and irreversible brain damage. It also affects visual-motor reasoning skills, causes deficits in attention and cognitive ability, and promotes brain cell death. The effects of having too much lead in the blood cannot be reversed.

Non-traumatic brain injury is defined as damage to the brain caused by internal factors such as oxygen or nutrient deprivation to brain cells, pressure from a tumor or blockage, exposure to toxins, or other neurological disorders. Lead poisoning, therefore, can be classified as a non-traumatic brain injury. Like other brain injuries, it is a chronic, progressive condition that requires treatment and support.

In children, signs of exposure can include behavioral symptoms such as aggression, hyperactivity, and refusal to play, as well as physical symptoms such as nausea, stomachaches, lethargy, and anemia. Chronic exposure may also result in a loss of coordination, numbness or tingling in the extremities, and difficulty concentrating. Since many deficits will not be evident until after a child starts school, neurodevelopmental monitoring should continue throughout childhood and well into early adulthood. As these children grow, they will likely need special education and assistance in both academic and social settings.

Adults who suffered childhood lead exposure were shown to have decreased brain volume, mainly in the prefrontal cortex, affecting fine motor control and executive functioning skills. These skills encompass awareness, impulse control, verbal reasoning, emotional regulation, ability to pay attention, and mental flexibility. It is clear that the dangers of lead, once thought to be safe at low levels, are both lasting and extensive. That is why it is imperative that children be screened for lead exposure when they’re young, especially if they live in older houses. Treatment for lead exposure is complicated because, once the blood-brain barrier is penetrated, the effects of lead on the brain cannot be stopped. As the symptoms change or worsen, the type of care a person needs will change as well. The scope of the rehabilitation necessary in these situations is vast.

Comprehensive neuropsychological testing and cognitive rehabilitation are essential in the treatment of lead poisoning. Rehabilitation approaches can include metacognitive strategy training, development of problem-solving strategies, and general help with executive functioning skills. As with many other types of brain injury, the ability to cope with stress and to keep emotions at appropriate levels requires a lot of effort. This is a disease that will require lifelong support, and the role of the caregiver is perhaps the most crucial.

Persistent cognitive deficits can sometimes be more disabling than the physical complications of lead poisoning and may require more assistance and monitoring on the part of the caregiver. Some people who experience behavioral problems associated with lead poisoning will not receive the professional rehabilitation and resources they need. As a result, their caregivers will need to act as medical advocates, offer emotional support, and provide help managing their executive functioning deficits.

Like other brain injuries, lead poisoning is a condition with long-lasting effects. Those who are exposed to the toxin early in life will need adequate resources and consistent support to help them cope with the various neurological deficits they will incur as they age. Since lead exposure cannot always be avoided, regular testing is the safest way to ensure early detection and effective management. Increasing awareness of the effects of exposure will also equip those affected with the knowledge required to find the care they need. This silent toxin poses a significant threat to the health of our children, and it is our collective responsibility educate ourselves about this issue.

This article originally appeared in Volume 10, Issue 2 of THE Challenge! published in 2016.