President Bill Clinton signed the Traumatic Brain Injury Act of 1996 (P.L. 104-166) into law on July 29, 1996. At the time, the TBI Act was the only federal legislation that specifically addressed TBI prevention, research, and service delivery through grants to states that were originally administered by the Health Resources and Services Administration (HRSA). The key federal agencies involved are:

When signed into law, this legislation:

The TBI Amendments of 2000 (P.L. 106-310) reauthorized the programs at HHS as part of the Children’s Health Act of 2000. The 2000 Amendments added funding authority to HRSA to make grants to state Protection & Advocacy (P&A) Systems to expand their advocacy services to include TBI. Other key provisions of the reauthorization were:

The Reauthorization of the TBI Act of 2008 reauthorized appropriations to HHS through Fiscal Year 2012. The bill made minor changes to reflect current language used by the CDC in public education and data collection, re-designated sections relating to CDC, and added the American Indian Consortium as an eligible entity for grant funds awarded by the HRSA Federal TBI State Grant Program. A key provision of note:

The TBI Reauthorization Act of 2014 (P.L. 113-196) reauthorized funding through FY 2019 for TBI prevention, surveillance or registry programs, grants to states and Indian Consortia for improving access to TBI services, and grants to state P&A systems. The law removed HRSA from the sections relating to the state grant and the P&A grant programs and authorized the HHS Secretary to determine the proper agency(s) to administer these programs. The law also:

The current authorizing legislation was signed into law in 2018. It was reauthorized one year early as a way to honor Sen. Orrin Hatch (R-Utah), who retired in 2018 and was an original sponsor of the 1996 bill in the Senate. The law:

The Congressional Brain Injury Task Force is essential to the brain injury community.

The 21st Century Cures Act increases investment in medical research at the National Institutes of Health and changes how the...

The Youth Sports Concussion Act would make it unlawful to import or sell athletic equipment for which the seller or...

The BRAIN Initiative is a large research program that seeks to improve understanding of the human brain and the causes...

The NDAA of 2008 included a number of provisions to improve care for active duty military and veterans who sustain...

The Individuals with Disabilities Education Act affirms the right of children with disabilities to a "free appropriate public education." 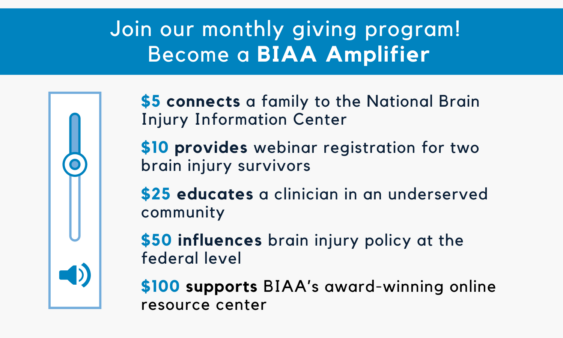